Questions and Answers About NF&I

Below are some frequently asked questions about Northeast Fence and Iron Works. Learn more about our company, our services, and our products. If you have additional questions, please contact us or call us at (215) 335-1681.

How much does a fence cost?

The cost of a fence can vary greatly and to ensure an accurate estimate, we would require more information about the product you want. Information includes, the height of the fence, install location, number of gates (single or double), and other factors. If you need a residential fence estimate, please call us at (215) 335-1681 or try our online residential fence estimator for an instant estimate.

Do you have most products in stock

While we do have may products in stock, some products are much more popular than others and go out of stock quicker. Please call us at (215) 335-1681 or email us for the status of our stocked products.

What is the difference between NF&I and Home Depot?

Northeast Fence & Iron Works is much more than a retail store, we have been in business for over 44 years and we are the largest fencing contractor in Philadelphia. We have achieved this by providing our customers with the highest quality services and materials in the industry!

Do you offer free estimates?

What's the difference between aluminum and steel?

Aluminum is a low density metal that is often used because of its innate ability to resist all sorts of corrosion. It is often used in the construction of buildings, transport vehicles as well as in the aerospace industry where many structural components have aluminum and its alloys as bases. It is lightweight, soft yet durable, malleable and ductile. Its appearance can range from something silvery to those that carry a duller gray tinge to it. This depends upon the roughness of its surface.

Steel on the other hand is an alloy which is primarily made up of carbon and iron. Whilst carbon may be the most common alloying material used for iron, there are also a variety of other elements that can be used. This includes chromium, manganese, tungsten and vanadium. Basically, carbon is added as a type of hardening agent which subsequently prevents any dislocations within the iron atom crystal lattice from separating and sliding past each other. Much like aluminum, it is also used in various construction purposes such as in the creation of tools, machines, automobiles, weapons as well as ships.

How long will a wood fence last?

The most popular used wood types for fences are cedar, spruce, and pine. Depending on several factors, cedar may last for about 15-25 years, spruce for about 4-8 years, and pine for 5-10 years.

Do i need a permit for my fence?

Permits are not confined solely to buildings. Even a fence must, in most cases, be permitted. Fence permitting is not universal. Some municipalities require it, others do not. Please check your local zoning regulations.

Do you offer any guarantees on your products?

Yes, we offer a lifetime guarantee on any products we manufacturer

Can I purchase replacement parts?

Yes, we have parts for wood, PVC, chain link, and more, we can get just about anything you may need. 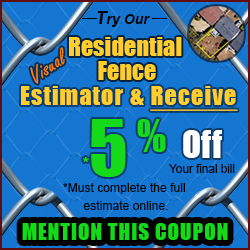